Four on the 4th Race

Meet the Designer of the 2021 USO T-shirt: Kit Hinrichs

By By Sydney Johnson 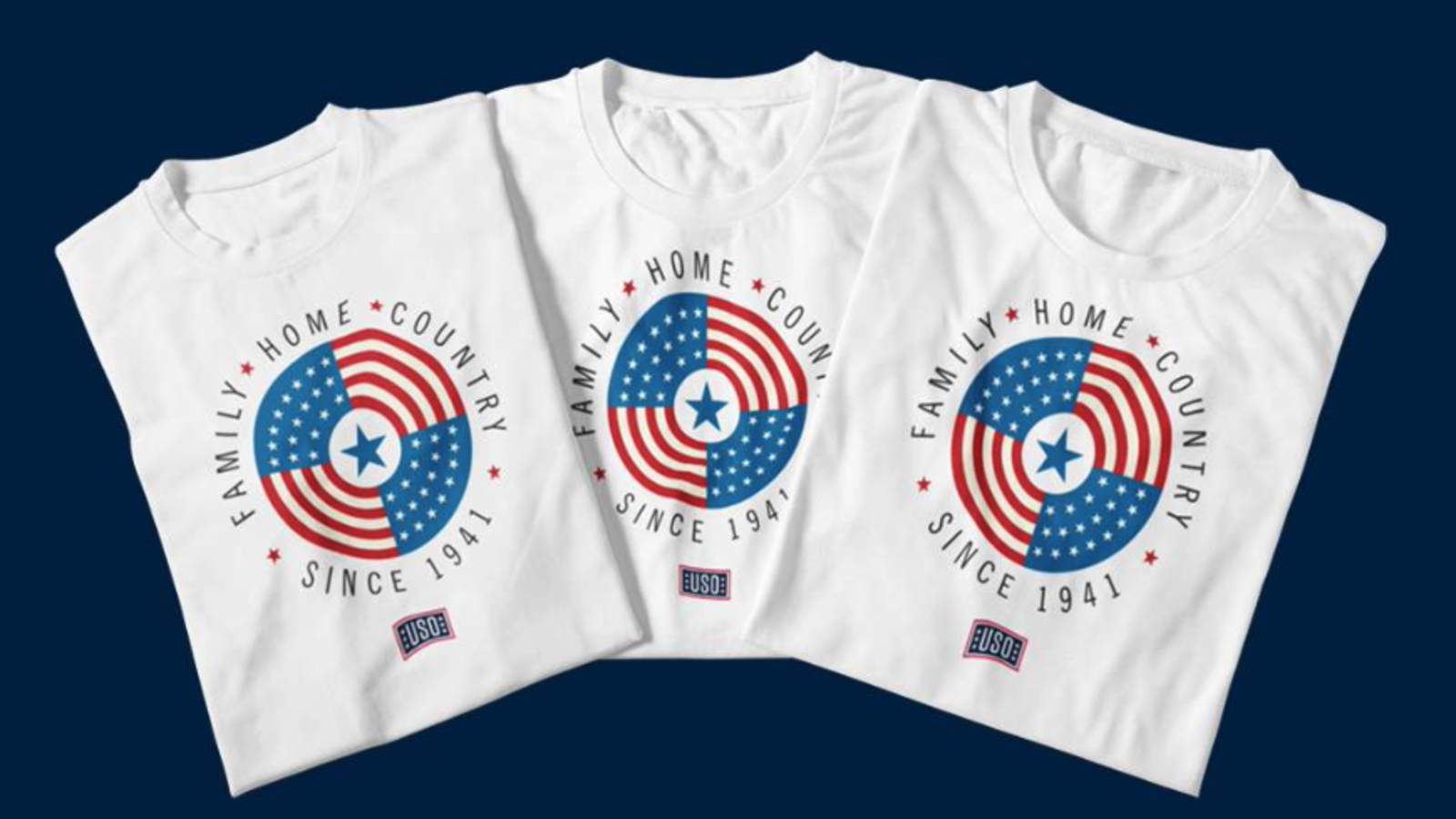 For many military supporters, warmer weather and the beginning of the patriotic months of the year mean one thing: it’s time for a new, limited-edition USO T-shirt! Thousands of service members around the world voted on this year’s collectible USO T-shirt design, which was created by renowned graphic designer and American flag collector, Kit Hinrichs.

“I hope [the shirt] makes [wearers] proud to be an American,” he said.

“I was very honored to be asked,” Hinrichs said. “The actual idea of it being out there and worn by … young people to people my age is rewarding.”

A self-described “narrative designer,” when Hinrichs approaches a new project, he aims to tell a story.

While working on the USO designs, his approach was no different. In addition to taking cues from his extensive American flag collection – which has inspired four of his books and countless designs – Hinrichs reflected on how he hoped supporters would feel in the T-shirt.

“I wanted to have something that would say hello to [the USO community], that they feel comfortable in … and identified what the USO had offered to them,” he said.

As a young man, Hinrichs himself learned what it was like to be a part of the USO community.

Shortly after graduating from the Art Center College of Design in Los Angeles, he spent six years as a Marine Corps reservist and crossed paths with the USO during his travels through airports.

“It was the Vietnam War and there were mixed feelings among people within the country,” Hinrichs said. “[The USO] was a safe and kind of a warming place you [could] go and feel comfortable.”

“I think it’s important that [the USO] offered that kind of safe place for [service members] to be and a place where people can recognize their service and identify them as being part of the fabric of this country.”

After completing his service in the Marines, Hinrichs pursued a career in design that took him across the country to New York for several years before moving him back to San Francisco.

It was during these years that Hinrichs expanded his American flag collection, which all started with an inherited flag sewn by his great-great-great-aunt Ida Peppercorn in 1865. Today, his collection is 5,000 items strong and includes iterations of the flag that date back to before the current design was finalized in 1912.

“[The U.S. flag] is a fascinating subject for me because it does have storytelling built into it. [It is] the single icon for a country [and has] evolved 27 different times in the history of the country,” he said.

Hinrichs says that his collection includes much more than flags and features items like quilts, Navajo weavings and other pieces that capture the American public’s artistic expression of the flag at various points in U.S. history.

“I’ve always enjoyed collecting the one-of-a-kind pieces that were out there,” Hinrichs said.

When reflecting about any connections between his American flag collection and this year’s USO T-shirt design, Hinrichs noted that the T-shirt’s aesthetic is similar to some Old Glory flag quilts he owns that feature circular elements. One contemporary touch that he consciously chose to incorporate in USO T-shirt design were the words “family, home and country,” which are part of the USO’s mission statement.

“It defines why [the USO is] there and why the USO has been so instrumental in making … life a little better for our service people since the Second World War,” he said.

“It’d be very nice to think that there were people all over the country who will wear this [USO T-shirt] and hopefully [will be] wearing it proudly. I’m just very pleased and warmed by that happening.”